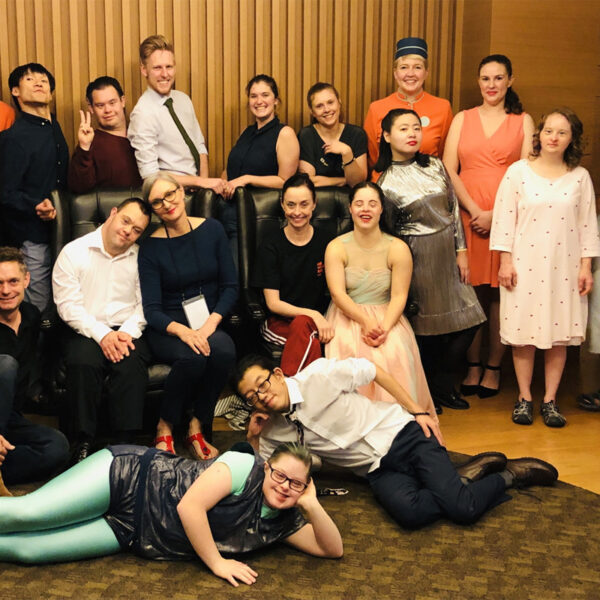 Restless has returned from a sold-out season of Intimate Space at the internationally acclaimed Seoul Street Arts Festival. The production brought together 4 Korean artists with disability and two key Korean coordinators along with a touring party of 17 from Restless to celebrate diversity and cultural collaboration on the world stage.

Seoul was a fabulous and exciting destination, it is a high-energy, intense city with cultural experiences on every corner. Office hours stretch well past 10 pm and the city streets have wonderful markets that create a chaotic and old-world vibe.

During our stay there was everything from a music and K-pop festival to a rice festival which took over the main square. Seoul’s 24 hour lifestyle sees young and old sharing their lives in public spaces.

There’s a tangible creative energy in Seoul that makes it very exciting to be part of.

The company was struck by the kind hearted, hardworking South Korean people, they’re friendly, open and willing to help.

It was amazing to be part of a rich and eclectic international festival. The directors of the festival celebrated diversity with an aim to reduce the gap between people and also to provide a gap in space to celebrate the unfamiliar in the vibrant city.

Presenting in an operating hotel and providing a unique opportunity for audiences was a huge success with all 20 shows selling out a week before opening. The New Seoul Hotel had never before experienced an immersive site specific work and were won over by the generosity of the performers as well as the integration of people with disability in a public space.

Working with the 4 Korean artists was a highlight of the tour. We found ways of communicating that surpassed language barriers. Within just one day the dancers felt comfortable in the physical space working alongside each other. There was a genuine sense of understanding and camaraderie between the Australians and South Koreans.

The Koreans immediately took to the style and sensibility of the Restless work and stamped their own unique personalities and physical styles on the work.

Families of the South Korean dancers thanked the Restless team for shining a light on their creativity and highlighting their ability to perform in a mainstream festival.

“I think the Korean dancers were so gentle and kind, they worked so hard” Jianna Georgiou, Restless dancer.

“It was very special working with the Korean dancers, they were nice people and great dancers. I feel warm from the experience” Michael Hodyl, Restless dancer

The Seoul Street Arts Festival provided Restless with 2 incredible co-ordinators who were dedicated, kind and worked 24/7 to help us deliver the collaborative work in such a short time frame. From translating and negotiating with the hotel to helping with social outings for the Restless team, Hesseon and Sehee were always a delight to work with.

The Korean audiences engaged with the work in a different way from Australian audiences, they were playful and more overtly curious.

“It was a really amazing performance. I’ve been touched hard. The way you used a place like a hotel… it’s really incredible… I especially like the moment when the performance and reality got overlapped” Audience Member

“It was a super, super funny beautiful and meaningful performance. Thank you so much for making me a good memory.” Audience Member

“Not only authentic but delicately touch people’s heart. Thank you.” Audience Member

This tour to Korea is the first fruit of the strategy of touring professional work nationally and internationally that Restless has been pursuing under Michelle’s leadership. There will be more to come in future years. In this way the company is creating work for its dancers and helping to establish careers for those dancers who are motivated to follow a professional path. The Restless dancers and crew are being paid full award rates and conditions for their rehearsals, travel and performance in Seoul.